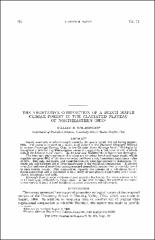 Survey was made of a beech-maple forest by the quarter point method during August, 1968. The forest is located on a mesic, level upland of the glaciated Allegheny Plateau in eastern Cuyahoga County, Ohio, in the Chagrin River drainage basin. Geologically the upland is underlain by Mississippian formations capped by a thin cover of till, in which soils of the Ellsworth soil catena—the Rittman and Wadsworth silt loams—are developed. The dominant plant species in this forest are American beech and sugar maple, which together comprise 68% of the trees recorded and have a total combined importance value of 62%. Red oak, red maple, and cucumbertree are important secondary dominants, but white ash and tuliptree are of little significance in the woodland composition. A greater overall abundance of secondary-associate mixed-mesophytic species than is normally found in such forests occurs. This composition supports the concept of a poly climax beechmaple association and is suggested to be a result of past selective lumbering and a variation in topography and soils. Although there is some evidence of past selective lumbering, the forest appears to be in an essentially undisturbed, virgin state. It has been partially destroyed as the forest is now part of a tract of land developed as a new secondary school campus.