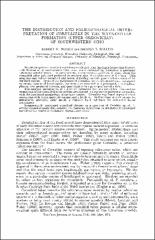 Seventeen species of marine invertebrates collected from the Upper Ordovician Waynesville Formation of southwestern Ohio were found encrusted by Cornulites, a presumed tubicolous annelid worm. Encrustation was interpreted as symbiotic in cases where the cornulitid tubes exhibited preferred orientation upon the exoskeleton of the host. This situation may reflect cornulitid utilization of feeding currents generated or employed by the host species. Symbiotic attachments of Cornulites were encountered most commonly on several species of brachiopods, but were also observed on a pelecypod, a monoplacophoran, two species of bryozoa, and questionably on a gastropod and nautiloid. Post-mortem encrustation of a host by Cornulites was inferred either from random orientation of the cornulitid tubes or from attachment in a manner or position incompatible with the functional morphology of the host species. Cornulites was found in post-mortem association with brachiopods, bryozoans, and a trilobite. In this situation the host species presumably provided, after death, a suitably hard substrate for cornulitid larval attachment. Symmetrically positioned cornulitid clusters on a specimen of Cyrtolites sp. cf. C. ornatus Conrad supports the accepted, but unproven, interpretation of bilaterally developed mantle-cavity organs in cyclomyan monoplacophorans.