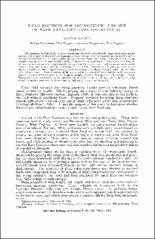 The purpose of this study was to determine whether wing length (measured on museum skins), tail length (measured on museum skins), breast color (observed in the field), or behavior (observed in the field) could be used to sex Barn Swallows. Differences in wingchord lengths of male and female study skins were not significant. Outer rectrice lengths of male study skins were significantly longer than females; thus, tail measurements could prove quite useful as a sexing technique in the field. Differences in breast color (measured visually as buff, light orange, medium orange, or dark orange) could not be correlated with sex. Breast colors of 24 males which attempted to copulate with a mount placed in the field were equally buff, light orange, medium orange, or dark orange. Copulatory behavior was used to sex paint-marked birds in the field, and indications are that other behavior patterns, such as that of following, may also be useful.