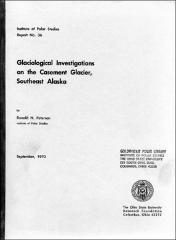 Institute of Polar Studies Report No. 36

Measurements made on Casement Glacier during the summers of 1965, 1966, and 1967 revealed time-variations in the horizontal component of the surface velocities. The summer velocities were greater than the “winter” velocities. The magnitude of the summer velocities varied from year to year, but was always greater than the winter velocity. These changes in surface velocity correspond to changes in the basal sliding velocity as measured in an ice tunnel along the margin of the glacier. Discharge and budget measurements were calculated for two sections of the glacier. The mass budget of each section was negative. Englacial velocities were calculated at each of the stakes for which the ice thickness had been determined by gravity and the surface velocity by surveying. Using these velocity data, the vertical components of the surface velocity, the longitudinal ice thickness profile, the trajectory of a layer of ice was calculated from line 14 through line 2. The estimated travel-time for this motion would be approximately 140 years. Two short-term heat-balance studies, of four days duration each, were conducted on the glacier in 1967. The contribution of each component of the heat balance equation was computed, first, using the assumption that the variation of the wind speed, temperature, and vapor pressure follows the power law, and later, recalculated assuming a logarithmic variation. The calculated results were compared with the observed values of the ablation during the corresponding periods. The values determined by the power law fit the observed ablation data better than those calculated from the logarithmic law. Investigations were made in an ice tunnel on the variations in slip rate and the mechanics of basal sliding. Basal sliding at the point of observation in the tunnel was a continuous process; there was no jerky, stick- slip movement and any observed jerky movement on the surface probably resulted from fracture and shearing of the surface ice. The rate of sliding is affected by changes in the quantity of lubricating water at the bed and most of the observed annual, seasonal, and diurnal changes in surface velocity result from changes in the quantity of free water at the bed of the glacier. Artificial obstacles were placed on a bedrock knob and the mode of flow of ice around them examined. It was determined that the critical size at which the contribution of regelation slip equals that of plastic flow is between 1 and 2.5 cm.