The Relationship Between Soil pH and Base-Saturation Percentage for Surface and Subsoil Horizons of Selected Mollisols, Alfisols, and Ultisols in Ohio 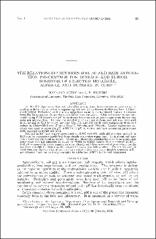 In the 7th Approximation soil classification system, base-saturation percentage is used as a definitive criterion in separating Alfisols (Gray-Brown Podzolics) from Ultisols (Red-Yellow Podzolics) and Umbric epipedons (acidic, dark-colored surface horizons) from Mollic epipedons (other dark-colored surface horizons). Ohio soil scientists are currently using field-determined pH to estimate base-saturation percentage when laboratory data are unavailable. To test the reliability of this estimation, soil pH was measured in water and in KC1 for three horizons (Ap, Bl, and B2) for 64 soils comprising three soil orders in Ohio—Mollisols (Humic Gleys), Alfisols, and Ultisols. Linear regression analysis was used to correlate pH in KC1 with pH in water, and base-saturation percentage with both pH in water and KC1. Soil pH in KC1 was highly correlated (r = 0.897 to 0.984) with pH in water, and pH in KC1 can be accurately predicted from simple regression equations. It is about one unit lower than the pH value in water. There is a closer relationship between base-saturation percentage and pH measure in water (r = 0.668 to 0.928) versus that measured in KC1. Soil pH measured in water correlates more closely with base-saturation percentage for Ap horizons (r=.838 to .928) than for subsoil horizons (r=.668 to .801). For all horizons of Mollisols, and Ap horizons of both Alfisols and Ultisols, relatively smaller amounts of H+ are released from the exchange complex by addiction of KC1 to the soil suspension.