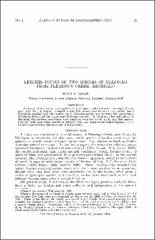 A survey of leeches in three genera of gastropods collected from Fleming's Creek, near Ypsilanti, Michigan, revealed a selective association between the smaller leech Helobdella papillata and the smaller snail, Helisoma anceps, and between the larger leech Helobdella lineata and the larger snail Helisoma trivolvis. In addition, a few individuals of the leech Glossiphonia complanata were found on both helisomid snails, and this species, together with nine other species of leeches, was also found either free-swimming or attached to substrate other than one of these snails.