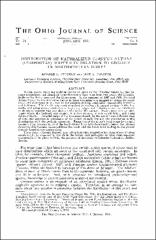 Within recent years the nodding thistle or musk thistle (Carduus nutans L.) has become naturalized and abundant in northwestern Ohio in at least two areas, the Castalia- Bellevue-Sandusky area and the Carey area. In the summers of 1967 and 1968, the total detailed distribution of Carduus nutans in these two areas was mapped by noting its occurrence and abundance in relation to the general geologic conditions, topographic features, and habitats. The thistle was most abundant in moderately grazed pasture fields, hay fields, and along grassy roadsides on high, dry ridges and hillsides where the limestone or dolomite bedrock was less than six feet below the surface. Plants were rare or infrequent where the bedrock was deeper, in flatter terrain, in cultivated fields, and along railroad tracks. Detailed maps of the two areas depict, by the use of three different sizes of dots, the aproximate abundance of the plants at each site and the correlation of this distribution with the geologic substrate. Expansion of the plant's local range by natural means is slow, because many of the heads do not have fully developed achenes, the achenes do not readily become separated from the head, and the heads tend to drop to the ground directly beneath the parent plant. These data, although limited, may allow botanists to predict locations where Carduus nutans might be expected to invade in the future, and geologists to infer, from reported occurrences of the plant in Ohio, the presence of limestone or dolomite bedrock at shallow depths.