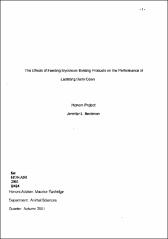 Three groups of lactating dairy cows (n = 10 each) were fed a common diet suspected to contain naturally occurring mycotoxins. Each group of cows was fed either a control diet (no product) or one of two mycotoxin sequestering agents, Mycosorb® and BioCycle Plus®. The present study was discontinued after 8 weeks, when mycotoxin contamination was determined to be low to nonexistent. Despite the lack of mycotoxin contamination, cows fed BioCycle Plus® consumed more DM than cows fed the control diet. Cows fed the Mycosorb® diet had increased concentration of milk urea nitrogen. Milk from the cows fed Mycosorb® had lower protein and elevated fat percentages. Neither protein nor fat yield were effected. Milk production was similar between the two treatments. Results indicate that, even without a significant mycotoxin challenge, mycotoxin binding agents can have significant effects on the performance of lactating dairy cows. This is likely due to the inclusion of various performance enhancing products, including yeast, probiotics, and vitamins. From this experiment, we concluded that ELISA analyses are not reliable measures of mycotoxin contamination. HPLC analyses can be used to establish more accurate standards.