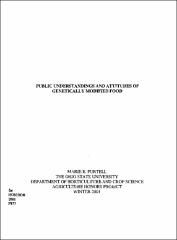 Genetically modified food, to one person, it sounds like an interesting addition to their normal diet, but to the next person it may seem like a fancy name for poison. In today's society, public opinion is extremely unpredictable. The inconsistencies between scientific explanations of new discoveries and the media's presentation of the explanations result in public fear of technology, misinformed individuals, and the unpredictable public perceptions. The biotechnology industry has progressed very quickly, often leaving consumers in the dust. Through this study, I hope to begin to bridge the gap. In order to determine specifically what fears, concerns and misconceptions about genetically modified food consumers hold, I conducted a series of four focus groups. During the focus group interviews, participants were asked a series of specific questions that I wrote to create a discussion that would reveal not only their concerns, but also their thought and feelings about genetically modified food. Besides analyzing public comments within a group interview, I also conducted a literature review to identify actual problems that may develop from genetic engineering technology and what is being done to stop their progression. While more consumers were concerned with health related issues, the greater potential for real problems exist in environmental impacts, such as pest resistance and threat to non-target organisms.