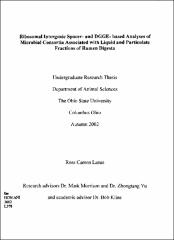 It is well recognized that ruminal microbes develop a dynamic biofilm upon digesta particles, with some bacteria tightly adherent and others more loosely associated. However, rumen microbial diversity is commonly examined using only liquid-based fractions. To assess the biodiversity associated with the biofilms present on digesta particles, the rumen contents from four sheep, fed a diet either entirely of grass hay, or a combination of com and grass hay (70:30), were separated into three fractions: liquid (strained through cheesecloth), associated (bacteria recovered by washing particles with buffer at room temperature) and adherent (bacteria extracted with buffer containing 0.15% v/v Tween-80, and chilling). The genomic DNA from sub samples of these communities was extracted and then subjected to either RIS (Ribosomal Intergenic Spacer) analysis, or DGGE analysis of the V3-region of the 16S rRNA gene. Of the two methods, the RIS profiles appeared to provide the most diverse banding patterns with respect to both diet and fraction of digesta. The RIS-PCR products generated from the four adherent communities were then cloned and subjected to RFLP analysis. The resulting patterns provided further evidence that the adherent communities of the four animals were affected by exogenous (diet) and endogenous (host derived) parameters. Clones obtained from each adherent community were randomly selected and subjected to DNA sequence analysis. Most of the sequenced clones obtained from animals consuming an all-grass diet appear to be most similar to Clostridium, Prevotella or Selenomonas species, but the sequence identity is less than 95% in most instances. From the animals consuming a grain-based diet, the sequenced clones are most similar to the Ruminococcus, Selenomonas, and Mitsuokella. Most libraries were less than 25 percent of the sequenced clones belong to the Prevotella/Bactericides subgroups, which are the numerically dominant sequences in clone libraries prepared from whole digesta. The results reveal a relatively large population of uncharacterized bacteria potentially involved in polysaccharide degradation.