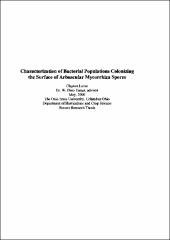 Arbuscular mycorrhizal fungi are obligate symbiotic fungi that infect the roots of many plants. Recent evidence suggests synergistic interactions between bacterial popu1ations and mycorrhiza may play an important role in the development of the mycorrhizal symbiosis. Several researchers have noted a positive relationship between primary infection of plant roots and the presence of active microbial populations. Similar studies suggest increases in plant yield as well. The purpose of this research was to 1) Characterize bacterial populations that colonize the surface of arbuscular mycorrhiza spores. 2) Explore the effects of vermicompost's microbiological activity on root colonization by mycorrhiza in greenhouse experiments. Vermicompost has diverse microbiological activities that may enhance plant and mycorrhizal growth. Glomus etunicatum and Gigosporia rosea mycorrhiza spores were obtained from the International Culture Collection of Arbuscular and Vesicular-Arbuscular Mycorrhizal Fungi {INV AM) for bacterial isolation. Loosely bound bacterial cells were removed by washing. Tightly bound bacterial cells were loosened by indirect sonication and then plated on rich media. Potential identification of representative isolates was completed by gas chromatograph fatty acid methyl ester analysis (GC FAME). Representatives of similar isolates were chosen for carbon compound utilization characterization. The ability of an isolate to utilize a wide selection of compounds was tested using Ecolog and Gram negative 2 MicroPlates from Biolog, Inc. The isolates were screened on colloidal chitin media for the production of chitinase enzymes. Mycorrhizal spores were also studied by scanning electron microscopy for the presence of bacterial colonies. Medicago truncatu/a plants were used in the greenhouse studies. Three potting mixtures were formulated. The potting mixtures included mycorrhizal inoculum in a nutrient poor soil. The treatments included the addition of sterile vermicompost; biologically active vermicompost or sterile vermicompost colonized with selected bacterial isolates from the mycorrhizal spores. After three months, the plants were harvested and percent of root length infected with mycorrhizal fungi was counted using the gridline intersect method. Characterization of the bacterial isolates by GC FAME analysis resulted in six clusters of closely related bacterial isolates and some other unrelated isolates. These clusters included isolates from both species of mycorrhiza suggesting the colonization of the spores was not accidental. One isolate was found only in bacterial suspensions from crushed spores suggesting a pathogenic or endosymbiotic relationship. Fifteen diverse carbon compounds were commonly utilized by the isolates. None of the isolates were capable of producing chitinase enzymes. This characterization of spore-associated bacteria is the first attempt known to me. This may contribute to understanding the role of mycorrhizal-associated bacteria in mycorrhizal symbiotic relationships. The plant inoculation experiments did not show any significant difference in the level of mycorrhizal colonization of the plants. However, one spore-associated isolate that was introduced to the potting media was reisolated from spores collected from this treatment. I do not preclude the role bacterial activity may play in mycorrhizal symbiosis and survival. However, it is likely many factors play a role in root colonization by mycorrhiza making it hard to isolate the effects of any one element.