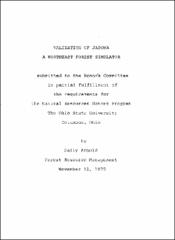 JABOWA, a northeast forest growth simulator, is a computer program model designed for use on and with data from the Hubbard-Brook Experimental Forest in New Hampshire. In essence, the program predicts natural succession which would occur on a ten meter by ten meter plot with specified conditions, such as elevation, moisture and temperature levels, tree species, and soil-site factors including soil texture, depth and moisture holding capacity. In theory, the program can be used in other geographic areas and with tree species different from those in the original program. The subject of this report is the validation of JABOWA for use in Ohio forests and with Ohio forest data. The forest system in New England has different species, site and climatic factors, and dynamic interrelationships than found in Ohio. Therefore, a model developed for New England requires some change to predict Ohio growth trends. A model such as JABOWA could be a valuable tool for forest managers to use as a guide for management decisions. Students could use the model in the classroom observing effects of various site factors on growth, succession, and management decision patterns. To get an understanding of the terms "system," "model," and "simulation," a discussion is presented. Models such as JABOWA are based on a "systems" approach to problem solving in other words, the unit being modeled is looked at in terms of interrelationships found between organisms, forces, substances and conditions within the system. To build a model of a system, one needs to understand the interrelationships between its subsystems. A simulation is a type of model which uses quantitative expressions to predict effects of changes in a subsystem on other subsystems. Complexity of relationships in a forest system make it difficult to predict patterns of change within the system. However, a knowledge of interrelationships allows functional equations to be developed which can predict patterns in the system or its parts within certain limits. Deviations from the "real world" in the program and the ramifications of these are discussed. Before validation could begin, the program had to be revised to Ohio species, climate, soil and other site factors. This was accomplished with the help of a revision guide supplied by the designer, Dr. Daniel Botkin of Yale University. Understory data supplied by Dr. James Brown of the Ohio Agricultural Research and Development Center, was used as a comparison for the simulated data. Trends of the real and simulated species compositions were not sufficiently compatible, thus proving, at least under the circumstances used for the test, JABOWA is not a valid predictor of growth patterns in Ohio forests. The conclusion is discussed in the light of possible error sources in the program and basedata. Inadequate data and information sources, and steps that can be taken to alter the program to a more desirable state are considered.