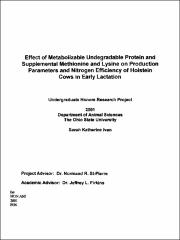 Milk production can have a negative effect on the environment from excessive excretion of nitrogen (N) by dairy cows. We hypothesized that targeted dietary changes to the N-intake pools, or the N available in the feed, would improve N efficiency by dairy cows, thus reducing negative environmental impact from milk production. Forty multiparous and 22 primiparous Holstein cows were used in a 2x2 factorial arrangements of dietary treatments to determine the effects of (1) metabolizable rumen undegradable protein (M-RUP): 100% (LoM-RUP) or 110% (HiM-RUP) of the requirements stated by the National Research Council (NRC) (2001), and (2) methionine (Met) and lysine (Lys) supplementation: control levels of 6.15 and 1.80% Lys and Met, respectively (LoAA), or supplementation at 108% and 120% (HiAA) of control levels for Lys and Met respectively. The Lys to Met ratio in the HiAA diets was set at 3.0, as recommended by the NRC (2001), whereas the LoAA diets contained Lys to Met ratios of 3.3 to 3.4. Cows were randomly assigned to one of four dietary treatments 14 to 21 days postpartum and continued on their assigned diet for 12 weeks. There was no effect of treatment on dry matter intake or milk yield. Treatment had significant effects on milk true protein (2.96, 3.08, 2.97, 3.02; SE = 0.041 %), milk fat (3.21, 3.07, 3.34, 3.39; SE = 0.11 %), and lactose (4.81, 4.73, 4.90, 4.78; SE = 0.024 %) for the HiM-RUP-LoAA, HiM-RUP-HiAA, LoMRUP-LoAA, and LoM-RUP-HiAA treatments respectively. Lower levels of M-RUP significantly decreased urinary N excretion. Cows were more efficient at converting intake N to milk Nat higher amino acid levels and with a Lys to Met ratio at 3.0. Dietary manipulation of N fractions can reduce the impact of intensive dairy production on the environment.