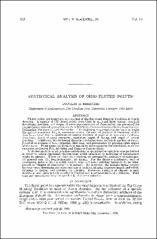 Fluted points are important as a marker of the Big Game Hunting Tradition in North America. A sample of 772 fluted points from Ohio is analyzed here; means, standard deviations, medians, and ranges of some measurements of these points are presented for six previously defined types: Convex-Parallel-Sided, Concavo-Convex-Sided, Ross County, Triangular, Pentagonal, and Holcombe. The following measurements are used to define the points: maximum length, maximum width, distance of position of maximum width from base, basal width, maximum thickness, distance of position of maximum thickness from base, depth of basal concavity, maximum length of fluting, and length of lateral grinding. In addition, the following discrete attributes were recorded: number of flutes, presence or absence of basal grinding, flint type, and provenience by physiographic region of the state. Point types are distinct in regard to most quantitative attributes, with the exception of Convex-Parallel-Sided and Concavo-Convex-Sided. A cluster analysis of all possible correlations of quantitative variables was performed in order to isolate functional clusters from which principles of technique of manufacture might be inferred. There are three such clusters, or, presumably, principles of technique: (1) general size, (2), length-linearity, (3) fluting. For the discrete attributes, tests of association indicate that a fourth factor, edge and basal grinding (possibly to be interpreted as "degree of completion"), is present. By inference, the manufacturing process has four steps: determination of general size of artifact, shaping to proper length and width, thinning by fluting, and finishing by grinding. However, strength of clusters is only moderate, and there is both overlap of clusters and interdependence of attributes. Flint type and provenience vary independently of other attributes.