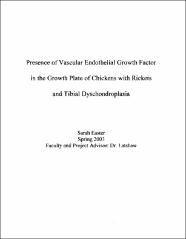 The goal of this experiment was to test for the presence of Vascular Endothelial Growth Factor (VEGF) in the growth plates of young chickens with rickets and tibial dyschondroplasia (TD). Normal growth plates were also harvested for comparison. The normal growth plate occurred with 1% calcium in the diet. Rickets was induced in two ways. A calcium deficiency was created by feeding 0.6% calcium in the diet, and a phosphorus deficiency was created by feeding .25% phosphorus in the diet. TD was induced by feeding 0.8% calcium, which is considered an intermediate calcium deficiency. The growth plates were harvested when the chicks were 19 days old, and were tested for the presence of VEGF. Other tissue samples were taken for testing against the anti-VEGF antibody in order to assure that the antibody being used would react with poultry VEGF. Portions of the breast, liver, and spleen were all harvested. The tissues were stored in a paraformaldehyde solution and were taken to the histology lab at The Ohio State College of Veterinary Medicine. The tissues were then embedded in paraffin and sectioned. After sectioning, the paraffin was removed and the tissues were re-hydrated. Immunohistochemistry was performed to test for the growth factor by using an anti-VEFG antibody and a secondary marker that indicated the places the anti-VEGF antibody reacted within the tissue. A human anti-VEFG antibody produced in rabbits was used because there was no commercially available anti-VEGF antibody specifically for poultry. VEGF is reportedly highly conserved among species, so a reaction between the hwnan antibody and the chicken growth factor was highly probable. Unfortunately, no reaction was detected in the poultry tissues while testing with the human anti-VEFG antibody.