The Lythraceae of Ohio 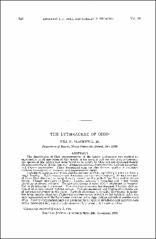 The distribution of Ohio representatives of the family Lythraceae was studied by examination of all specimens of this family in ten in-state and one out-of-state herbaria. Six species of the Lythraceae were found to be native to Ohio and are discussed herein: Decodon verticillatus, Rotala ramosior, Ammannia coccinea, Peplis diandra, Lythrum dacotanum, and Cuphea viscosissima. Three introduced taxa are also deemed worthy of inclusion: Lythrum hyssopifolia, L. salicaria, and Lagerstroemia indica. Lythrum hyssopifolia and Peplis diandra are rare in Ohio, each being known but from a single locality. Rotala ramosior and Ammannia coccinea are infrequent, the southern part of their Ohio distribution being directly related to the path of the Ohio and/or Scioto rivers. Though infrequent at present, Lythrum salicaria is spreading and is now locally abundant at several stations. Decodon verticillatus is rated in this treatment as frequent, but its distribution is scattered. It will certainly become less frequent if further destruction of its natural marsh habitat occurs. Lythrum dacotanum and Cuphea viscosissima are of common occurrence in the state. Lythrum dacotanum is broadly distributed in moist, low-lying, prairie situations; Cuphea viscosissima occurs in moist or dry habitats and is the only representative of the Lythraceae common in the Appalachian uplands of southeastern Ohio. County distribution maps are presented for all species included except Lagerstroemia indica (crape-myrtle), which is only occasionally planted as far north as Ohio.