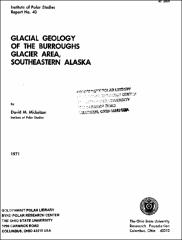 Institute of Polar Studies Report No. 40

Burroughs Glacier is a sprawling, stagnating remnant of a much larger Neoglacial ice mass in Glacier Bay National Monument. In 1892, when the earliest photographs were taken of it, an ice plateau 10 km by 25 km was present. Since that time the ice surface has downwasted as much as 750 m and its calving margin has retreated 27 km. The ice mass separated into the Burroughs Glacier with its margin on land and Plateau Glacier with its terminus at sea level. Between 1960 and 1970 ice surface lowering averaged 9.5 m/yr at 205 m elevation (in 1960) to 4.6 m/yr at 440 m elevation (in 1960). Retreat of the land-based ice front was up to 140 m/yr and of the calving ice margin up to 350 m/yr during this time. During deglaciation, the ice-flow direction changed because of the emergence of hills. Vertical sections of till show changes in lithology and fabric direction with depth. Because the rate of change of ice-flow direction is known the rate of till deposition has been calculated. Rates at seven localities on stoss and lee sides of nunataks range from 0.4 cm/yr to 2.8 cm/yr. Most till deposition took place after 1890 except on the stoss side of nunataks where thick till has been deposited. Hilltop striations were cut until just before the hills emerged. Moraine ridges up to 2 m high have been squeezed into crevasses from below near the calving Plateau Glacier margin. Within the ridges, till fabric diagrams have modes with azimuths that are not necessarily perpendicular to the ridges but are parallel to the horizontal component of the last ice-flow direction. With the emergence of nunataks near the southeastern Burroughs terminus, small, stagnant bodies of ice were left in the lee of nunataks. Here sand and gravel eskers up to 100 m long and 4 m high and with sharp crests head at the break in slope between the valley wall and valley bottom. In one case they were deposited between 1959 and 1960 by streams flowing at the base of the ice in the same direction as the ice surface gradient. Another esker, composed of laminated silt and sand at its downstream end, was deposited between 1965 and 1967 in a closed tube under hydrostatic pressure. In some cases water flowing around nunataks did not flow under the ice but flowed along the ice margin depositing kame terraces, or into the ice leaving a hummocky blanket of sand and gravel on the till. Three ice-dammed lakes were present at the southeast terminus of Burroughs Glacier at times between 1941 and 1960. Sand and silt up to 2 m thick remain, but distinct shorelines were not formed. Meltwater flowing directly from the glacier has deposited outwash both on and off ice. The major stream began depositing outwash between 1941 and 1948. By 1970 outwash at the 1948 margin position had been incised about 23 m. During this interval the ice withdrew about 1300 m up the valley. Outwash deposited on ice between about 1956 and 1964 had collapsed by 1970. Water flowing from the ice has cut marginal channels in till to depths of 20 m. Sets of three and four large channels were occupied 10 to 15 years. Smaller marginal channels, 1-2 m deep, were cut along the stoss sides of several hills. At least 8 successively lower channels up to 100 m in length were formed in one year. The gradients of these channels reflect the ice margin gradient.