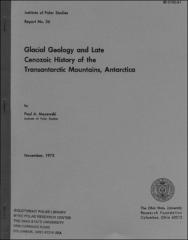 Institute of Polar Studies Report No. 56

A glacial geology for the Transantarctic Mountains is determined, based on a comparison of glacial deposits in the Queen Maud Mountains and along the nunataks at the heads of the ice-free valleys of southern Victoria Land with deposits studied by other workers in southern Victoria Land. The deposit used to define the Queen Maud Glaciation is the Sirius Formation which is composed of two members: (1) lodgement till and (2) stratified ice-contact deposits. This formation is distinguished and interpreted by the investigation of the elevation of outcrop, underlying striae and grooves, structure, fabric of elongate clasts, particle size distribution, lithologic and mineralogic components, and rounding and freshness of contained clasts. Fluvial features including channels and potholes are used as evidence of the "interglacial" period which followed the Queen Maud Glaciation. These features represent far more extensive amounts of meltwater than are presently noted in the Transantarctic Mountains during even the height of the ablation season. The Scott, Shackleton and Amundsen Glaciations are differentiated by three sets of lateral moraines which can be traced throughout the Transantarctic Mountains. These moraines are named from oldest to youngest: High, Middle and Low Moraines. They are distinguished by the investigation of the elevation and continuity relative to present ice surface, morphology, thickness of drift, presence or lack of an ice core, and weathering of surficial clasts. In addition, several characteristics of the soils developed in these moraines are also used: particle size distribution, color, secondary salt content, acidity - alkalinity, and clay mineral content. Ice surface reconstructions are developed for the former glaciations recorded in the Transantarctic Mountains. These reconstructions are generated from a study of the distribution of the glacial deposits used to determine the glacial chronology since these deposits record former ice levels in the Transantarctic Mountains. The ice surfaces of former glaciations in these mountains are extrapolated inland to generate former ice sheet surface profiles and out onto the Ross Ice Shelf to determine former grounding lines and ice thicknesses in this area. The ice surface reconstructions indicate that during the Queen Maud Glaciation the Transantarctic Mountains were almost completely covered by ice. The East Antarctic sheet was as much as 350 meters thicker in the area of the present ice divide . A grounding line in the Ross Sea area extended 225 kilometers north of the present terminus of the Ross Ice Shelf. During the "interglacial" period which followed the Queen Maud Glaciation, the Antarctic ice sheet shrank to possibly less than its present dimensions. Three readvances follow this interglacial corresponding to the Scott, Shackleton and Amundsen Glaciation. Each readvance is marked by progressively less ice cover over the Transantarctic Mountains. The elevation of the ice sheet at the ice divide probably never exceeded 100 meters more than the present elevation during these glaciations. Grounding lines in the Ross Ice Shelf area were situated closer to the coast during each successive glaciation, finally resulting in the present, or Amundsen Glaciation grounding line . Ice volumes are determined from the ice surface profiles of the former glaciations. These ice volumes are extrapolated over the area of Antarctic grounded ice and ice shelves, assuming the Transantarctic Mountains reflect glacial events over the whole continent. The ice volumes are converted to sea level equivalents to determine the effect of Antarctic glaciations on worldwide sea level.

This report is part of a continuing investigation in the Transantarctic Mountains, Antarctica, undertaken by the Institute of Polar Studies at The Ohio State University. It is the result of work completed during the 1968-69, 1970-71 and 1971-72 field seasons.