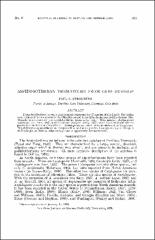 Three hundred and seventy-four mussels representing 37 species of the family Unionidae were collected from streams in the Ohio River and Lake Erie drainages in Ohio during 1966. Mussels were examined for aspidobothrean trematodes only. Two species, Aspidogaster conchicola von Baer, 1827, and Cotylaspis insignis Leidy, 1857, were recovered and are reported for the first time from Ohio. Aspidogaster was much more abundant than Cotylaspis. The difference in abundance is interpreted to be due to greater host specificity on the part of Cotylaspis in Ohio (a relationship that is apparently not universal).