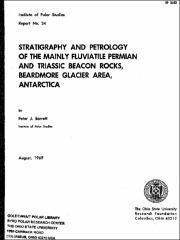 Institute of Polar Studies Report No. 34

The near horizontal Beacon strata (Devonian?-Triassic) of the Beardmore Glacier area rest on a peneplain cut mainly in a Precambrian to Lower Paleozoic graywacke and phyllite sequence intruded by granitic plutons. The 2600-m-thick Beacon sequence comprises eight formations; the Alexandra Formation (Devonian?), the Pagoda, Mackellar, Fairchild and Buckley Formations (Permian), the Fremouw and Falla Formations (Triassic), and the Triassic?-Jurassic Prebble Formation. The Ferrar Group (Jurassic), which overlies and intrudes the Beacon rocks, comprises the Kirkpatrick Basalt and Ferrar Dolerite. This study is concerned mainly with the stratigraphy and petrology of the Permian and Triassic Beacon strata above the glacial Pagoda Formation. The Mackellar Formation, which conformably overlies the Pagoda Formation, consists of 60 to 140 m of laminated medium- to dark-gray shale and light-gray fine-grained sandstone, but the proportion of sandstone increases to the northwest. Current flow was southeasterly. The formation was deposited in a quiet body of water extending for 1000 km along the Transantarctic Mountains from the Queen Elizabeth Range to the Ohio Range; Sr87/Sr86 ratios suggest a nonmarine environment. The Fairchild Formation consists of 130 to 220 m of arkosic sandstone deposited by southeast-flowing streams. The sand was derived from a granitic and metasedimentary source, though same may have been reworked glacial debris. The Buckley Formation is a crudely cyclic coal-bearing sequence about 750 m thick; sandstone beds rest on erosion surfaces and grade upward into carbonaceous shale. Coal forms as much as six percent of the section. Leaves (mainly Glossopteris) and stems are common. Buckley sandstone had two nonvolcanic sources; quartz - plagioclase K-feldspar sand from the west, and quartz-plagioclase sand from the north. Intermediate-acid volcanic detritus appears 100-300 m above the base of the formation and dominates the sandstones in the upper part. The Triassic Fremouw Formation consists of three parts: the lowest is a 100-m-thick cyclic sequence of quartzose sandstone and greenish-gray siltstone; the middle, 200 m thick, is mainly siltstone and includes sandstone with volcanic fragments; the upper 300 m is mainly similar volcanic sandstone, although the beds become carbonaceous toward the top. A labyrinthodont jawbone fragment was discovered near the base of the formation, and leaves of Dicroidium and logs were found near the top; root impressions occur throughout. The Falla Formation, which is from 160 to 530 m thick, is a cyclic sandstone-shale sequence in the lower part. The sandstone is more quartzose than that below, but it is diluted progressively up the section by volcanic material. The upper part of the formation is dominated by vitric tuff. Accretionary lapilli suggest at least one volcanic center within the Queen Alexandra Range. The Fremouw and Falla Formations were deposited on a flood plain with streams flowing to the northwest, in contrast to the southeast-flowing Permian streams. The Prebble Formation, from 0 to at least 460 m thick includes laharic deposits, agglomerate and tuff, and is overlain by Kirkpatrick Basalt. Several diabase sills, normally from 50 to 200 m thick, intrude the strata between the Pagoda and Falla Formations. Metamorphism by the sills has resulted, in the Buckley and Fremouw Formations, in locally extensive laumontite replacement of plagioclase, volcanic grains and matrix in the volcanic sandstones. Replacement minerals in the Falla and Prebble Formations include clinoptilolite, analcime and mordenite. A few sandstones in the Buckley and Fremouw Formations contain prehnite and grossularite.

This report is based on a Ph.D. dissertation by Peter J. Barrett, 1968.