A Comparative Study of Regional Planning in Britain and the Netherlands 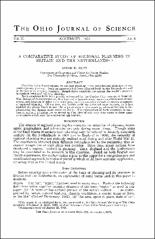 Coordinated and comprehensive regional planning is the most-desired objective of any contemporary planner. Such an approach has been adopted both in the Netherlands and in Britain with varying emphasis, though these countries are among the world's pioneers in modern town and regional planning. Both countries have been greatly influenced by the Garden City concept of Howard. The themes of deconcentration, development of less-advanced areas, establishment of new towns, and location of industrial nuclei have been implemented in both countries as aspects of regional planning. Of the two, the Netherlands has achieved more success, as it has molded the above ideas to suit the requirements of the country, whereas Britain is implementing the themes more conservatively. The experiences of both countries in matters of regional planning are so revealing that they should help Americans to draw some conclusions which may have universal application.

Author Institution: Department of Geography and Center for Urban Studies, The University of Akron, Akron, Ohio 44303