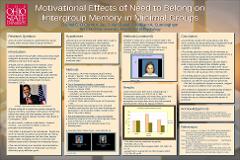 It has been repeatedly demonstrated that there is an in-group bias for face recognition such that people show greater memory for in-group compared to out-group members. Social categorization models have proposed that this bias is due to the differential way in which people are categorized. In-groups may initiate a more elaborate encoding process involving more individuation and leading to better memory. The current research proposes a motivational mechanism for the differential encoding of in-group members. In two studies, we tested whether people with greater need to belong, an important social motivator, would show increased in-group recognition bias. In both studies, participants were members of one of two teams. They completed a learning task in which they learned the faces of both teams and then completed a memory task in which previously learned faces and novel faces were presented and participants indicated which faces they had previously seen in the learning task. Results from study 1 indicated that people who were higher in trait-level need to belong showed even greater in-group face memory bias and this had a greater impact at the encoding rather than retrieval stage of memory recall. Study 2 experimentally manipulated need to belong and indicated that participants who had been socially rejected, and presumably had greater belonging needs, compared to non-socially rejected participants showed greater in-group face memory bias. Together these studies show that need to belong has differential motivational impacts on in-group bias in face recognition.