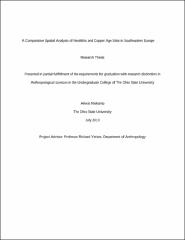 On the Great Hungarian Plain and surrounding region, archaeological research on the Late Neolithic period has focused mainly on the excavation of tell settlements, while adjacent flat-lying settlements were either unrecognized or ignored. With the increasing use of geophysics in archaeological projects, more and more archaeologists are surveying the areas surrounding tells with the hope that geophysics and spatial analysis can aid them in unraveling the circumstances that accompanied major settlement reorganization during the Late Neolithic to Early Copper Age transition. The goal of this study is to examine attributes of settlement organization, measurable from magnetic survey data, and compare the degree of variation across six Late Neolithic and Early Copper Age sites from Southeastern Europe. To accomplish this, maps of the mainly flat-lying settlements generated through either magnetic prospection or excavation were digitized and analyzed with ArcGIS, and intra-site settlement characteristics such as house orientation, size, and distribution were determined for six sites in Southeastern Europe. These analyses indicate that there is a large amount of variation within and between most sites in the sample. Because of this, no general patterns of settlement organization can be conclusively delineated. In some cases, even large nucleated Neolithic settlements with tells surrounded by flat sites were autonomous villages with little social differentiation or ranking, even though some sites exhibited clear signs of coordination and planning.