The effect of temperature on germination behavior and seedling morphology in locally adapted maize landraces from Chiapas, Mexico 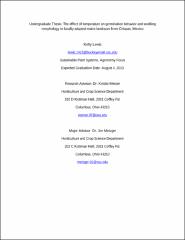 Southern Mexico is the center of origin for maize (Zea mays ssp mays) and hosts an array of landraces (or traditional varieties). The diversity found within and among landraces is largely shaped by the interplay between selection and gene flow, resulting in populations that often evolve to be locally adapted to a particular environment. Mercer et al. (2008) discovered that landrace maize populations sourced from along an elevational gradient in the Mexican state of Chiapas exhibited a pattern of asymmetrical local adaption. We aimed to build upon this revelation by elucidating the role of temperature as a driving force of local adaptation in the early phases of the maize lifecycle. Using a thermogradient table, we exposed the seeds of nine landrace maize populations, three from the highlands, three from the midlands, and three from the lowlands, to temperatures the seeds would likely encounter during the planting season in Chiapas, and examined the rate of germination and percent germination. We also exposed the seeds of the nine landrace populations to periods of cold (approximately 10.0 ºC) lasting zero, seven, and 21 days, followed by exposure to favorable conditions (25.0 ºC), in order to test the effects of cold periods on seed germination and seedling morphology. Interestingly, elevational group was often not a significant predictor of fitness measures such as the percent germination and percentage of normal seedlings, indicating that patterns of local adaption in response to temperature may not be discernible in the early lifecycle at the temperatures we tested. One exception to this pattern occurred at the lowest temperature, 10.0 ºC, where the highland populations exhibited the highest percent germination and germination rate, followed by midland populations, and lowland populations, and a pattern of local adaption was clear. By contrast, in the rest of the temperature treatments, the midland populations generally performed best, although not always significantly. This suggests that the evolutionary advantages imparted by local adaptation and enjoyed by highland populations in highland environment, described by Mercer et al. (2008), may not be present in the seed or seedling stage of the lifecycle in temperatures above 10.0 ºC. Thus, the ecological relevance of local adaption driven by temperature in the seed and seedling phase of the lifecycle may be limited to early planting situations in the cool, highland environment.