The Isotope Composition of Strontium and Cation Concentrations of Lake Vanda and Lake Bonney in Southern Victoria Land, Antarctica 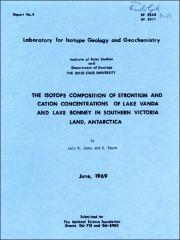 The ice-free valleys of southern Victoria Land are located in the Transantarctic Mountains west of Ross Island, Antarctica. In these valleys, the average annual temperature is well below the freezing point of water and precipitation is extremely low. Nevertheless, lakes are present and soils have begun to form since deglaciation. These lakes and soils are characterized by high concentrations of salts. The salinity of some lakes, such as Lake Vanda and Don Juan Pond in Wright Valley and Lake Bonney in Taylor Valley, is several times greater than that of sea water. In addition, salts occur as surface efflorescences and as lenses and cement within the soil. The origin of the salts in the lakes and soils of the ice- free valleys is controversial. Possible sources that have been suggested include: (l) trapped sea water; (2) wind-transported marine salts; (3) volcanic activity and associated hot springs; and (4) chemical weathering of local soil and bedrock. Previous attempts to explain the origin of the salts have resulted in conflicting conclusions because the parameters which were used (chemical composition, isotope composition of the water) have been modified by chemical or physical processes occurring in the lakes. In order to determine the origins of the salts, a new parameter is needed that can unambiguously identify a specific source for the salts. The isotopic composition of strontium in the salts meets the necessary requirements because: (1) the isotopic composition of strontium of each of the possible sources is distinctive and differs significantly from that of the other sources, and (2) the isotopes of strontium are not measurably fractionated in natural processes such as are occurring in the ice- free valleys. The objective of this study was to ascertain the usefulness of strontium isotopes as natural tracers, and to identify thereby the source(s) of the salts in the lakes and soils of the ice-free valleys in Antarctica. Lakes Vanda and Bonney were studied in detail because they are the largest and most unusual of the Antarctica lakes. Both lakes are perennially ice-covered and are meromictic. At depth the water is highly saline and has surprisingly high temperatures. Lake Vanda has a maximum density of 1.10 g/ml at a depth of 67 m, and a maximum recorded temperature of +28°C at the bottom of the lake. Lake Bonney has a maximum density of 1.20 g/ml at a depth of 32 m, and reaches a temperature of +8°C at about the middle of the depth profile. In order to determine the origin of the salts in the two lakes, measurements were made of the isotopic composition of strontium in water samples collected at different depths from the surface to the bottom of the lakes. The results of these analyses were then compared to isotopic compositions of strontium in sea water, basalts of the McMurdo volcanic province, and the strontium in water-soluble salts from the soils in Wright and Taylor Valleys. From these comparisons the principal sources of the strontium in the two lakes can be clearly identified. In addition to measurements of the isotopic composition of strontium in the lakes, chemical analyses of the brines have been made to provide information that can be used with the isotopic studies to develop a model for the geochemical evolution of the lakes. The combination of isotopic and chemical analyses of the brines in Lakes Vanda and Bonney permits the formulation of a better model than has been possible before.

"RF 2340" and "RF 2411"
This report is based on a dissertation submitted by Lois M. Jones to the Graduate School of The Ohio State University.
Second Annual Progress Report Grants GA-1713, GA-898X, submitted to the National Science Foundation