On Kao in Kao wo Tsubusu: Interdependent Social Face in Japanese 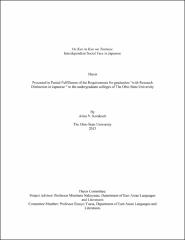 As a collectivistic, high-context culture (Ting-Toomey 1988, Morisaki and Gudykunst 1994), Japanese social interaction and language are deeply rooted in the social roles given to actors within the culture. When these roles are not fulfilled, a loss of social “face” occurs (Matsumoto 1988). This social “face” and physical “face” overlap in the expression kao wo tsubusu (lit. “to smash face”). The current study investigates this expression in two ways. The first examines the situations in which kao wo tsubusu is used to describe a loss of social face in The Yomiuri Shinbun website’s Hatsugen Komachi advice page. For each situation, the information such as the social and relational roles of the actors, as well as what is at stake (circumstances) and whose face is smashed by the action of whom (agency) was gathered and analyzed. All losses of face were related to the failure to carry out the cultural performance expected of social obligations in work and family environments and of all parties concerned when work or a relationship is suggested. The expression was not used when speaking about oneself in any of the social situations, but always to someone else. The second part consisted of a survey of native speakers to confirm this finding that kao in kao wo tsubusu is used only when speaking about the other in a facework interaction. The study participants chose the acceptability of a given sentence on a scale of 1-7 in order to test grammatical person and the self-other face dichotomy in sentences using kao wo tsubusu. The results of the survey confirm that the expression cannot be used when speaking about oneself, but always to someone else. This suggests that a distinction between “relational” face and “personal” face is needed in the discussion of face and facework. The social face “transferred” and referred to as kao in kao wo tsubusu faces outwards towards the community from which it came and can be labeled “relational face.” In taking on a role in society, a person takes on a mask given to them and is evaluated by cultural and social norms and expectations. In Japan, it is this mask and the face wants of the particular role that they are playing that is at stake in the circumstances examined. Since this social “relational” face is directed outwards, it is impossible for the kao smashed in kao wo tsubusu to belong to its wearer.