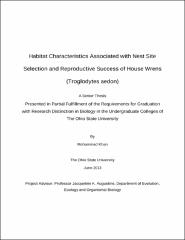 Habitat characteristics influence the survival and reproduction of animal species. House Wrens (Troglodytes aedon) are an abundant species of songbird, are tolerant of humans, and nest readily in artificial nest boxes. We hypothesized that House Wrens would attempt more nests, raise more young, and feed their young more frequently in areas that contained more natural vegetation. Nesting boxes were placed in three habitats (100-123 boxes per year): a woodland area, a golf course, and a residential area. We quantified habitat characteristics within 15m of a nest box: % canopy cover, % shrub cover, % natural grass cover, % mowed grass cover, number of trees >10cm in diameter, and the presence or absence of blacktop, pine trees and other human structures. Between April and August 2010-2012, nesting success was monitored via checking the nest boxes at least twice a week for signs of reproductive behavior such as the formation of nests or the appearance of eggs. On the tenth day after hatching, the nestlings were banded with aluminum and colored leg bands to aid in estimates of survival. We observed that more nests were attempted in boxes without blacktop or pine trees, but with more tree trunks and human structures, such as fences. Given that a nest was successful, the number of nestlings banded increased with more vegetation, but decreased with the number of trees and with the presence of human structures. Feeding rates did not vary by habitat for four day observations. However, when the nestlings were 10 days old, the number of visits increased when more blacktop was present. Our first hypothesis was supported; house wrens attempted more nests and produced more nestlings in natural areas without blacktop and pine trees. Our second hypothesis was not supported; feeding rates for House Wrens did not vary with habitat characteristics. This research supports the idea that human alteration of habitats may be detrimental to reproduction of songbirds. Particular care should be taken to maintain natural habitats if threatened or endangered birds are present.