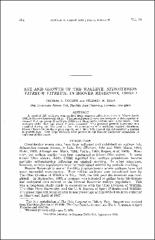 A total of 527 walleyes was studied from trap-net collections made in March-April, 1967, in Hoover Reservoir, Ohio, The age and growth-structure analysis of this population showed that age group II walleyes (1965 year class) were predominant in the catch. Few walleyes older than age group V were captured. The greatest growth increment was attained during the first year of life. In comparison with walleyes studied elsewhere, Hoover Reservoir walleyes grew rapidly until their fifth year of life, followed by a decline in growth rate. Few large walleyes were present in the Hoover Reservoir population at the time of this study.