Controlled Phenylhydrazine-Induced Reticulocytosis in the Rat 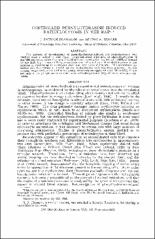 The pattern of development of phenylhydrazine-induced rat reticulocytosis was studied over a period of nine days. Intraperitoneal injections of phenylhydrazine (4 mg/100 gm) every other day caused a fall in hematocrit which leveled off at 60% of normal by the fifth day. Increased erythropoiesis was indicated by a three-fold increase in the number of circulating reituclocytes after the first three injections. The immediate response was the release of stored mature reticulocytes from the bone marrow. As the anemia progressed, more and more young reticulocytes appeared until 70 to 85% of the red cells in the peripheral circulation were reticulocytes and 20% of these were juvenile forms.