Microclimatological, Pedological, and Geomorphological Studies in the Western Tasersiaq Area, Greenland During Summer 1964 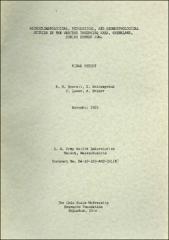 During the summer 1964, personnel of The Ohio State University Institute of Polar Studies conducted a field program in the Sukkertoppen Ice Cap area of southwest Greenland. The program included studies of soil and mass wasting in the Tasersiaq area immediately east of the ice cap, and studies of the microclimatology across the eastern edge of the ice cap. The results of this research program are contained in four parts. Part I, by Adolph Kryger, discusses the microclimatological (excluding radiation) results of observations taken at four stations, one at the base of the slope below the eastern edge of the Sukkertoppen Ice Cap, two intermediate ones on the slope, and one at the edge of the glacier. Part II, by Fritz Loewe, discusses the radiation observations. Both have related their observations to those at other permanent stations along the western Greenland coast. Part III, by K. R. Everett, presents the results of studies of mass-wasting and patterned ground phenomena. Part IV, by N. Holowaychuk and K. R. Everett, contains most of the results of the pedological studies. The report herein includes the discussion of soil morphology,chemistry, and classification.