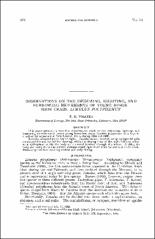 This paper presents a record of observations made on the swimming, righting, and burrowing movements of twelve young horseshoe crabs, Limulus polyphemus (L.), kept in a salt-water aquarium in New London, Ohio, during 1965 and 1966. Activity occurred primarily at night. Limulus swam inverted, using its legs and gills for propulsion and its tail for steering, while the sloping front of the cephalothorax acted as a hydroplane to lift the body as it moved forward through the water. Arching its body and using its tail as a lever, Limulus could right itself when turned over on its back. Burrowing involved both leg motion and body flexing.