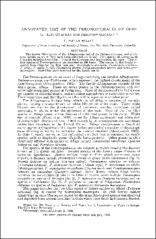 The known Ohio species of the Albuginaceae and of the Peronosporaceae, and of the host species on which they have been collected are listed. Five species of Albugo on 35 hosts are recorded from Ohio. Nine of the hosts are first reports from the state. Thirtyfour species of Peronosporaceae are recorded on 100 hosts. The species in this family reported from Ohio for the first time are: Basidiophora entospora, Peronospora calotheca, P. grisea, P. lamii, P. rubi, Plasmopara viburni, Pseudoperonospora humuli, and Sclerospora macrospora. New Ohio hosts reported for this family are 42.