The Age, Stratigraphic Relationships, and Correlation of the Lower Part of the Olentangy Shale of Central Ohio 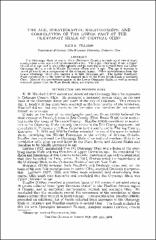