A Geologist Looks at the Natural Vegetation Map of Ohio 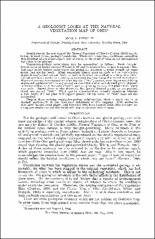 Boundaries on the new map of the Natural Vegetation of Ohio by Gordon (1966) neatly follow, in most places, geologic boundaries. Where this is not true, conditions controlling this distribution are either aspect, microclimate, or the result of some as-yet unrecognized variation in the geology. Vegetation-geology correlations may be generalized as follows. Beech (-maple) forests occur on better drained Wisconsin till and in outwash-free valleys in eastern Ohio. Oak-sugar maple forests occur where the geological substrate is moist enough for sugar maple, but not for beech. Mixed mesophytic forests occur on shale and on north-facing slopes in unglaciated eastern Ohio, as well as in other areas where a variety of environmental conditions results in a variety of communities, best mapped as mixed mesophytic. Mixed oak forests are composed of either dry-site ("dry") species, occurring on south-facing slopes and sandstone hills in unglaciated eastern Ohio and on well-drained gravel deposits in western Ohio, or of wet-site ("wet") species, growing on very flat plains with heavy clay soils. Swamp forest is also shown on flat, poorly drained plains, as are prairies, which are mainly "wet". What specific characteristics actually determine whether a flat, poorly drained plain will support prairie, swamp forest, or "wet" oaks are not understood. Despite these striking vegetation-geology relationships, there is much yet to be learned, particularly in the large-scale refinement of this mapping. With geologists who have learned some plants, and botanists who have learned some Ohio geology, exciting new results are possible which will help to advance both sciences.