Fresh-Water Mollusca of the Finger Lakes Region of New York 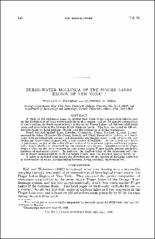 A study of the molluscan fauna in central New York State has provided information on the distribution of fresh-water mollusks in that region, and on the species composition of snails and pearly fresh-water mussels in the major Finger Lakes and thirteen additional lakes and reservoirs in the Oswego River drainage basin. The data are based on 120 collections taken by hand picking, sieving, and the utilization of diving equipment. Small isolated upland lakes (Dryden, Cazenovia, Como, Panther, Kasoag Lakes), meromictic lakes (Fayetteville Green, Round, and Clark Reservation Lakes), and reservoirs with abnormal silt content and frequently fluctuating water levels (Jamesville and DeRuyter Reservoirs) support only a few species of mollusks. In the meromictic lakes in particular, empty shells collected are believed to represent former molluscan populations whose shells are preserved by the calcium-rich waters. Morphometrically oligotrophic lakes on the major waterways (the seven largest Finger Lakes) possess moderate numbers of molluscan species. In contrast, the shallow lakes of the limestone belt that are in direct communication with the larger rivers have the greatest species diversity. A table is included that shows the distributions of the species of mollusks collected in these bodies of water, distinguishing between living and dead representatives.