Fungi Associated with the Activated-Sludge Process of Sewage Treatment at the Lebanon, Ohio, Sewage-Treatment Plant 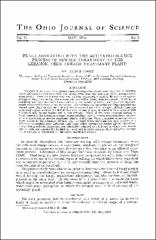 Samples of materials in various stages of sewage treatment were obtained at monthly intervals between October, 1967, and April, 1968, from the Lebanon, Ohio, sewage-treatment plant. From both secondary and tertiary processes, a total of 93 species or species groups of fungi, including filamentous and yeast-like types, was recovered. Methods of sampling and isolation techniques, and data for several chemical and physical measurements made on the samples are presented. Comparisons of bacterial and fungal populations tested show that, on the basis of colonies recovered per ml of sample, effluent from the activated sludge aerator yielded 41 bacteria to one fungus, in contrast to a ratio of 1430 bacterial cells to one fungus cell in raw sewage. Many of the more common species of fungi present in the Lebanon sewage-treatment plant have also been recovered from similarprocess materials in sewage-treatment plants at Dayton, Ohio, a number of sewage-treatment plants in the Chicago, Illinois area, a small waste-stabilization pond system in a different watershed near Lebanon, and from other sewage-treatment plants elsewhere. Fungi, being reducer organisms, are admirably adapted to a habitat in which their assimilative cells are continually bathed in a nutrient medium such as that offered by sewage in the process of treatment by the activated-sludge process.