Utilization of Woody Plants by Beavers in Northeastern Ohio 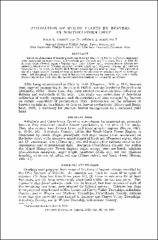 Henry, Dale B.
Bookhout, Theodore A.

Relative abundance of woody plants and their utilization by beavers (Castor canadensis) were measured on watersheds in Ashtabula and Columbiana Counties, Ohio, in 1966-67. A food index showed aspen (Populus sp.), alder (Alnus sp.), hop-hornbeam (Ostrya virginiana), black cherry (Prunus serotina), willow (Salix sp.), dogwood (Cornus sp.) and oak (Quercus sp.) to be major foods; 20 different woody species were utilized. The amount of use of a single species seemed to depend largely on the relative availability of all food species. All topographic features may influence site occupancy by beavers, but in this study, fluctuating water level was the factor most detrimental to sustained habitation.