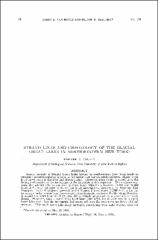 Recent restudy of Glacial Great Lake history in northwestern New York tends to confirm a general sequence of nine to ten major lake stands, predicted from others' work in adjacent areas in the Erie and Huron basins. However, some doubt is raised as to the dating and position of the ice margin at the initiation of this sequence. The evidence suggests that glacial lake waters rose to form Lake Whittlesey between 12,700 and 13,800 years B.P., with advance to either the Lake Escarpment, Gowanda, or Hamburg End Moraines. Lake Whittlesey lowered to the Warren I level about 12,700 B.P., after the ice margin had retreated less than one mile from the main portion of the Hamburg Moraine. A second but brief lake stand (Warren II) is weakly suggested by a lower set of beach ridges. However, such a stand must have been very brief, for it gave way to a much lower lake soon after the ice margin had retreated from the next more northerly (Alden) moraine. This much lower lake stage, probably correlating with Lake Wayne, occurred during construction of the gravelly Buffalo Moraine and before waters rose again to form Lake Warren III. Lake Warren III, evidenced by the strongest beaches in this area, ended following ice-margin retreat from the Batavia Moraine, when lake level dropped 40 feet to the Lake Grassmere level. Evidence for lower and later glacial lake stands is sparce, but includes features which may correlate with the short-lived Lakes Lundy and Early Algonquin, and a much smaller local glacial lake, Dana. Lake Dana, the last glacial lake in this portion of the Erie basin, was extinguished as the terminus of the ice sheet retreated north of the Niagara escarpment and into the present area of Lake Ontario and thus opened the Rome outlet to the Mohawk-Hudson River drainage system. The average of several C14 dates from the Lake Ontario basin suggests that this event occured prior to 12,100 years ago. At least 170 feet of isostatic uplift has taken place on the Buffalo isobase since Lake Whittlesey time.