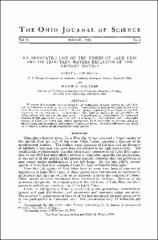 Dramatic fluctuations have occurred in the abundance of many species in Lake Erie and its tributary waters in the last century. Some fishes of former economic importance have become commercially extinct. Several species apparently have been extirpated, especially in the tributaries. It is believed that further changes in the abundance of other species will occur in the near future. This publication consolidates the confirmed records of fish species for Lake Erie and its tributaries. One hundred and thirty-eight species of fishes are listed and, where appropriate, brief comments on present and past distribution, and abundance and economic status are given. Selected references are listed as additional sources of information for each species.