The Effect of Distraction During Exercise on Feeling States 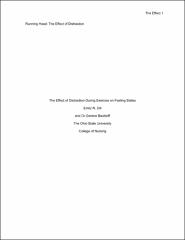 PURPOSE: To evaluate the effect of distraction (auditory or visual) versus no distraction during exercise on feeling states in healthy adult aerobic exercisers. Hypotheses: 1) Healthy adults who aerobically exercise using distraction (auditory or visual) will report improvement in their post-exercise feeling states as compared to their pre-exercise feeling states during the single aerobic exercise session, 2) Auditory distraction will impact feeling states more positively as compared to visual distraction or no distraction when used during aerobic exercise; and 3) Exercise self-efficacy has a moderating influence on feeling states during aerobic exercise. Feeling states were measured by the Exercise-Induced Feelings Inventory (EFI) comprised of four subscales (revitalization, positive engagement, physical exhaustion, and tranquility). Exercise self-efficacy was measured using the Exercise Self-Efficacy Scale (ESE). METHODS: A quasi-experimental three-group pretest-posttest design with convenience sampling was used. The subjects self-selected to one of three groups (auditory distraction, visual distraction, or control) according to their planned use of distraction during the single aerobic exercise session, with a total of 30 subjects (ten per group). Each subject completed EFI, ESE, and demographic questionnaires prior to exercise, and EFI post-exercise. The data was analyzed using a 3x2 Analysis of Covariance (ANCOVA), comparing the mean EFI subscores (pre- and post-exercise) across the three groups, using the ESE score as a covariate to control for self-efficacy. The alpha level was set at 0.05. FINDINGS: Significant differences were noted between groups for exercise self-efficacy score [ESE] (F=3.549, df 2, p=0.043), with the control group found to have significantly lower ESE scores than either the music distraction or visual distraction groups. Significant change for the EFI revitalization subscore (p=0.037) was noted when both distraction groups were combined for t-test analysis. No significant differences were seen across groups for the other three subscales. Using the ESE score as covariate (ANCOVA), no significant differences were noted for any of the EFI subscores between groups. However, significant improvements were noted across all groups from pre- to post-test for EFI positive engagement (p = 0.001) and EFI revitalization (p = 0.000). A strong positive correlation is noted between the EFI Positive Engagement and EFI Revitalization subcores (r = 0.809, p = 0.00). However, little correlation is noted between ESE and EFI Positive Engagement (r = 0.006, p=0.975), ESE and EFI Revitalization (r = 0.072, p=0.711), ESE and EFI Physical Exhaustion (r = 0.199, p=0.301) or ESE and EFI Tranquility (r = 0.141, p=0.466). CONCLUSION: Distraction as a combined group showed a significant change in revitalization compared to the control group. Significant improvement in two EFI subscales for all three groups adds further support to the evidence for the positive emotional effects of aerobic exercise. However, the moderating influence of exercise self-efficacy on feeling states is not supported in this study. Results showed no support for the greater effectiveness of one type of distraction over the other. This study suggests that exercise distraction may be useful for improving certain aspects of feeling states.