Economic Aspects of the Biology and Control of the Oriental Fruit Moth, Grapholitha Molesta Busck, in the United States 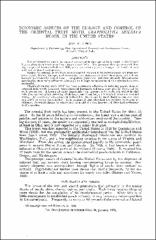 The oriental fruit moth has caused considerable damage to fruit crops in the United States since its introduction from Japan about 1913. The greatest damage occurred during the period between 1930 and 1950, when fruit moth larvae damaged the tender shoots and fruit of peach and quince. Biological control, in the form of widespread releases of fruit-moth parasites imported from Japan, Korea, Europe, and Australia, was unsuccessful since these parasites did not become permanently established. Indigenous parasites, however, notably Macrocentrus ancylivorus, were very effective, although no foreign colonization of this species has been successful. Chemical control with DDT has been extremely effective in reducing populations of oriental fruit moth; however, populations of European red mite were greatly increased by such treatment. A better an safer insecticide now appears to be carbaryl, which is also effective against plum curculio, stink bugs, and plant bugs, although it does not control mites. An additional advantage of carbaryl is that it can be used closer to harvest than can DDT or other insecticides. It is suggested that chemical insecticides belonging to different chemical classes be alternated to avoid the development of chemical resistance in the species.