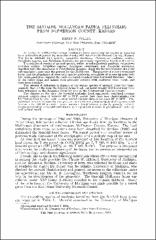 An early- or middle-Illinoian-age molluscan fauna containing 63 species is reported from sediments deposited by ancestral Smoky Hill River in McPherson County, Kansas. The fauna contains four species, Lampsilis ventricosa, Pleurobema cordatum catillus, Strophitus rugosus, and Bulimulus dealbatus, not previously reported as fossils in the state. The relative diversity of unionid species, which includes Quadrula quadrula, Pleurobema cordatum catillus, Strophitus rugosus, Lasmigona complanata, and Lampsilis ventricosa, together with the abundance of Probythinella lacustris, imply the former existence of a river substantially larger than the present Smoky Hill River. The paucity of strictly woodland forms and the abundance of terrestrial species preferring or capable of tolerating relatively dry, open conditions, suggest that only scattered stands of trees bordered the river. Much of the valley slope and upland were probably covered with scattered trees, shrub, and open grass meadow. The present distribution in Kansas of the extant species of unionids from this fauna suggests that, at the time the Sandahl fauna lived, the upper Smoky Hill River may have been tributary to the Arkansas River by way of the Cottonwood-Neosho system. The climate at the time the Sandahl mollusks lived apparently combined average summer temperatures of between 65° to 70°F, cooler than those now characterizing the McPherson County area, with average winter temperatures of between 30° to 35°F. Precipitation was not necessarily any greater than that now characteristic of the east-central Kansas area (20-30 inches). Lower summer temperatures probably greatly reduced evapotranspiration rates and contributed to a significant increase in groundwater recharge and surface runoff.