The Bass Islands Formation in its Type Region 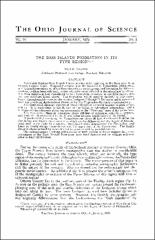 The Upper Silurian Bass Islands Formation has as its type region the Bass Islands, of Ottawa County, Ohio. Originally divided into the Greenfield, Tymochtee, Put-in-Bay, and Raisin River subunits, it has been classed as a series, group, and formation by different workers, and has been redefined, restricted, and even eliminated in the subsurface by others. The Bass Islands is here considered to be a formation, divisible, in the type region, into the four members listed above. The formation, which consists entirely of hypersaline facies, disconformably overlies the marine Lockport ("Guelph") Dolomite and is separated from the overlying Amherstburg Dolomite by the Tippecanoe-Kaskaskia unconformity. The Greenfield Member consists of about 110 feet of dolomite lacking in argillaceous matter. It is equivalent to the A1 unit of the Salina of subsurface terminology, and a widespread disconformity at its top corresponds to the "Newburg" zone of the subsurface. The Tymochtee Member comprises about 560 feet of dolomite, anhydrite, gypsum, and shale which correspond to the A2 and other lettered subdivisions of the Salina. Disconformably overlying the Tymochtee are about 80 feet of dolomite forming the Put-in-Bay and Raisin River members, which can be differentiated (by degree of brecciation) only in the Lake Erie islands. Brecciated units characterize the Put-in-Bay, and breccias locally occupy channels cut into the upper part of the Tymochtee. The Raisin River is characterized by more limited brecciation and by pseudobreccias. The paleogeographic setting and association with penesaline facies suggest that most carbonates of the Bass Islands Formation have been dolomitized by seepage refluxion prior to final lithification.