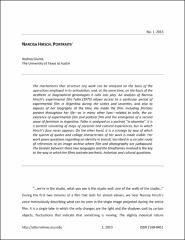 The mechanisms that structure any work can be analyzed on the basis of the operations employed in its articulation, and, at the same time, on the basis of the aesthetic or biographical genealogies it calls into play. An analysis of Narcisa Hirsch’s experimental film Taller(1975) allows access to a particular period of experimental film in Argentina during the sixties and seventies, and also to aspects of her biography at the time she made the film, including frictions present throughout her life—as in many other lives—related to exile, the coexistence of experimental film and political film and the emergence of a second wave of feminism in Argentina. Taller is analyzed as a portrait “in absentia”. It is a portrait consisting of maps of personal and cultural experiences, but in which Hirsch’s face never appears. On the other hand, it is a strategy by way of which the system of quotes and collage characteristic of her work is made visible. Her work poses questions regarding an identity in transit, inscribed in a circular route of references to an image archive where film and photography are juxtaposed. The tension between these two languages and the timeframes involved is the key to the way in which her films activate aesthetic, historical and cultural questions.