Development of an Educational Tool for State Legislators Regarding CRNA Practice 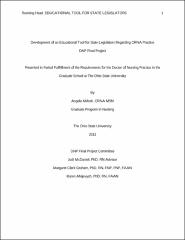 Introduction. It is important that state legislators in Ohio are knowledgeable about the role of Certified Registered Nurse Anesthetists (CRNAs) in the healthcare system to prepare them for voting on CRNA-related legislation. The purpose of this project was to design a messaging tool containing key information about CRNA practice in the state of Ohio for dissemination to Ohio legislators, and to validate the contents of the tool using a panel of experts. Project Design. The framework for this project was based on Rogers’ Diffusion of Innovation Theory (1962, 1983, 2003; Dobbins, Ciliska, Cockerill, Barnsley, & Dicenso, 2002). Specifically, this project focused on the first stage of the theory: knowledge. The messaging tool was created in the form of a pamphlet that highlights the educational requirements, scope of practice, geographic distribution, and economic importance of CRNAs in Ohio. The pamphlet was sent to a panel of experts who evaluated the content for accuracy, appropriateness, and relevance to the intended audience. Results. There was general agreement among the expert panel that the content within the pamphlet was valid. An Item Content Validity Index (I-CVI) and Scale-Content Validity Index (S-CVI) were calculated. Each item had an I-CVI of 0.88-1.00, the S-CVI/Ave was 0.93, and the S-CVI/UA was 0.40. The written responses by the expert panel members were also analyzed and revisions to the pamphlet were made based on the suggested changes. Discussion. State legislators in Ohio need evidence-based data about CRNAs when presented with CRNA practice related legislation that requires their vote. A pamphlet was developed containing this information, sent to a panel of experts for content evaluation, and revised based on those evaluations. The educational tool is now ready for dissemination to current and future legislators in the state of Ohio.