The Power of Nightmares: Pathological Fear in U.S. Foreign Policy 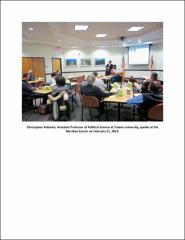 Five decades ago, Karl Deutsch described what he called "Parkinson's Law for national security": A state's insecurity expands directly with its power. This certainly seems to apply to the United States, which is simultaneously the strongest country in the history of the world and the most insecure of today's great powers. The threats it has recently identified in the international system, from Iraq to Chavez to terrorism, are minor compared to what most states have had to confront throughout history. As states grow in power they usually also become more materially secure; why, then, do they often seem to worry more, often about trivial matters? This talk will explore the political psychology of unipolarity, and discuss the importance of beliefs in explaining foreign policy behavior. Incorrect, baseless, pathological beliefs -- such as the common perception that the world is a dangerous place -- drive policy-making in counterproductive and often tragic directions, like onward toward Baghdad. Presumably better policy would result from more rational cost-benefit analyses.