Growth of Earth Science in the Secondary Schools in Ohio 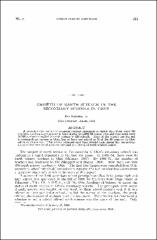 A questionnaire survey of secondary-school principals revealed that there were 613 teachers teaching earth science in Ohio during the 1968-69 school year and that there were 50,180 students enrolled in earth science in 410 schools. Most of the schools are located in metropolitan centers in Ohio, but at least one school in 75 of the 88 counties in Ohio offers earth science. This survey revealed that Ohio should rank among the top several states in the number of students enrolled in a standard earth-science course.