China's Fear of Contagion: Tiananmen Square and the Power of the European Example 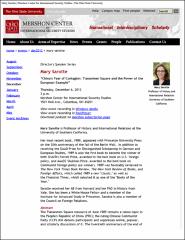 The Tiananmen Square massacre of June 1989 remains a taboo topic in the People's Republic of China (PRC); the ruling Chinese Communist Party (CCP) still detains participants and suppresses online, popular, and scholarly discussions of it. The twentieth anniversary of the end of the transatlantic Cold War, however, saw the release of new sources from high-level contacts between the CCP and foreign leaders. These new sources, combined with older ones, show the extent to which Chinese political leaders were obsessed with the democratic changes in Eastern Europe and were willing to take violent action to prevent similar events on their territory. This obsession has received mention from a few scholars, but until now it has played too small a role in the current understanding of Tiananmen. New evidence documents that one of the main motivations for the CCP in deploying the army in June 1989—on the same day as semi-free elections in Poland—was its desire to combat possible contagion from the events in Europe. These sources also show that the CCP knew it had little to fear from reprisals by the United States, which it predicted would take "no real countermeasures."