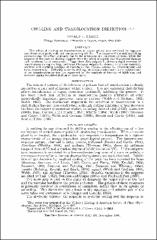 The effect of chilling on translocation in higher plants was reviewed by separate consideration of path, sink, and source-cooling effects. The response of the sink to chilling indicates that the effect is mainly due to the inhibition of a metabolic process, while the response of the path to chilling suggests that the effect is mainly due to physical damage such as alteration of membranes. Sugar beet Beta vulgaris L. shows a rapid recovery of translocation during chilling, and bean Phaseolus vulgaris L. shows a very slow recovery; northern and southern ecotypes of Canada thistle, Cirsium arvense L., resemble beet and bean, respectively. Differing bases for chilling-inhibition mechanisms in the subdivisions of the translocation system are suggested by the analysis of kinetics of inhibition and recovery during localized chilling of these parts.