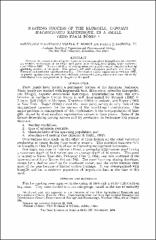 Some of the factors influencing the reproductive success of the bluegill sunfish, Lepomis macrochirus Rafinesque, in an Ohio farm poind were investigated during three summers from 1965 to 1967. The availability of nesting substrate was the major variable affecting spawning success in the pond. Fine gravel and sand substrates produced the most fry. Those of mud and debris produced less fry. Chemical control of algal mats in 1965 and 1967, by providing open areas of preferred substrate, increased nesting success and thus indirectly contributed to overpopulation of bluegills in the pond.